His momentary relief was replaced with anger at himself for losing the sack of sandcrawlers. His displeasure doubled when he considered his folly at falling asleep. Had he remained awake, he would have made the return trip unhurriedly, would not have sprained his ankle, and would have had time to explore the streambed above the bluffs for the smooth stones he prized so dearly for slinging. Now there would be no stones, and it would be at least another week before he could return. He stood and tested his ankle. It protested such treatment, but he could get along on it.

He limped over the grass to where he had left his belongings and picked up his rucksack, staff, and sling. He swore an oath he had heard soldiers at the keep use when he found the rucksack ripped apart and his bread and cheese missing. Raccoons, or possibly sand lizards, he thought.

He tossed the now useless sack aside and wondered at his misfortune. Taking a deep breath, he leaned on his staff as he started across the low rolling hills that divided the bluffs from the road. He would be no wetter for trudging to town than for staying under a tree. The wind picked up, and Pug felt the first cold bite against his wet back.

He shivered and hurried his pace as well as he could. The small trees started to bend before the wind, and Pug felt as if a great hand were pushing at his back. Reaching the road, he turned north. He heard the eerie sound of the great forest off to the east, the wind whistling through the branches of the ancient oaks, adding to its already foreboding aspect.

The wind intensified and rain stung his eyes, bringing tears to already wet cheeks. A gust caught him, and he stumbled off balance for a moment. Water was gathering in the roadside gully, and he had to step carefully to keep from losing his footing in unexpectedly deep puddles. For nearly an hour he made his way through the ever growing storm. The road turned northwest, bringing him almost full face into the howling wind. Pug leaned into the wind, his shirt whipping out behind him. He swallowed hard, to force down the choking panic rising within him.

He knew he was in danger now, for the storm was gaining in fury far beyond normal for this time of year. Great ragged bolts of lightning lit the dark landscape, briefly outlining the trees and road in harsh, brilliant white and opaque black. The dazzling afterimages, black and white reversed, stayed with him for a moment each time, confusing his senses. 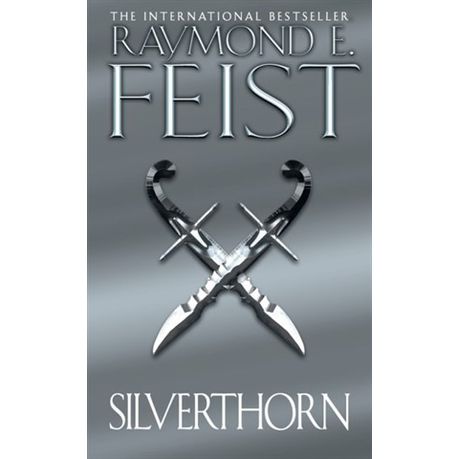 Enormous thunder peals sounding overhead felt like physical blows. Now his fear of the storm outweighed his fear of imagined brigands and goblins. He decided to walk among the trees near the road; the wind would be lessened somewhat by the boles of the oaks. As Pug closed upon the forest, a crashing sound brought him to a halt. In the gloom of the storm he could barely make out the form of a black forest boar as it burst out of the undergrowth.

The pig tumbled from the brush, lost its footing, then scrambled to its feet a few yards away. Pug could see it clearly as it stood there regarding him, swinging its head from side to side. Two large tusks seemed to glow in the dim light as they dripped rainwater. Fear made its eyes wide, and it pawed at the ground. The forest pigs were bad-tempered at best, but normally avoided humans. This one was panic-stricken by the storm, and Pug knew if it charged he could be badly gored, even killed. Standing stock-still, Pug made ready to swing his staff, but hoped the pig would return to the woods.

Its pink eyes seemed to glow as it trembled with indecision. A sound made it turn toward the trees for a moment, then it dropped its head and charged. The pig slid sideways in the muddy footing, hitting Pug in the legs. He went down as the pig slipped past. Lying on the ground, Pug saw the boar skitter about as it turned to charge again. Suddenly the pig was upon him, and Pug had no time to stand. He thrust the staff before him in a vain attempt to turn the animal again. The boar dodged the staff and Pug tried to roll away, but a weight fell across his body.

Pug covered his face with his hands, keeping his arms close to his chest, expecting to be gored. After a moment he realized the pig was still. Uncovering his face, he discovered the pig lying across his lower legs, a black-feathered, clothyard arrow protruding from its side. Pug looked toward the forest. Once the valuable weapon was protected from further abuse by the weather, the man crossed to stand over the boy and beast.

He was cloaked and hooded, his face hidden. His right side smarted, and his legs felt equally bruised. With his ankle still tender, he was feeling ill-used today, but nothing seemed broken or permanently damaged.

Large, meaty hands lifted him to his feet. He completed his work and turned to Pug. You had best lodge with my master and me. Can you walk? Taking an unsteady step, Pug nodded. Without a word the man shouldered the pig and took his bow. He set off at a brisk pace, which Pug had to scramble to match. The forest cut the fury of the storm so little that conversation was impossible.

Pug tried to remember if he had seen the stranger before.

He had the look common to the hunters and foresters that lived in the forest of Crydee: large-shouldered, tall, and solidly built. He had dark hair and beard and the raw, weather-beaten appearance of one who spends most of his time outdoors. For a few fanciful moments the boy wondered if he might be some member of an outlaw band, hiding in the heart of the forest. He gave up the notion, for no outlaw would trouble himself with an obviously penniless keep boy.

Remembering the man had mentioned having a master, Pug suspected he was a franklin, one who lived on the estate of a landholder. The franklins were freeborn, giving a share of crop or herd in exchange for the use of land. He must be freeborn. No bondsman would be allowed to carry a longbow, for they were much too valuable — and dangerous.

After what seemed to be hours, the man walked into a thicket of trees.


Pug nearly lost him in the darkness, for the sun had set some time before, taking with it what faint light the storm had allowed. He followed the man more from the sound of his footfalls and an awareness of his presence than from sight. Pug sensed he was on a path through the trees, for his footsteps met no resisting brush or detritus. From where they had been moments before, the path would be difficult to find in the daylight, impossible at night, unless it was already known.

Soon they entered a clearing, in the midst of which sat a small stone cottage. Light shone through a single window, and smoke rose from the chimney. I must dress the pig. He turned, taking in the scene before him. The interior of the cottage was a small single room. Against one wall was the fireplace, with a goodsize hearth before it. A bright, cheery fire burned, casting a warm glow.

Next to the fireplace a table sat, behind which a heavyset, yellow-robed figure rested on a bench. His grey hair and beard nearly covered his entire head, except for a pair of vivid blue eyes that twinkled in the firelight.


A long pipe emerged from the beard, producing heroic clouds of pale smoke. Pug knew the man. Come, there is a blanket hanging by the fire, and you are drenched. Hang your clothes to dry, then sit there. Pug did as he was bid, keeping an eye on the magician the entire time. If a farmer had a cow calve a monster, or blight strike the crops, villagers were apt to ascribe it to the work of some magician lurking in nearby shadows.

In times not too far past they would have stoned Kulgan from Crydee as like as not. His position with the Duke earned him the tolerance of the townsfolk now, but old fears died slowly. After his garments were hung, Pug sat down.

A scaled head rose up above the tabletop and studied the boy. The trilogy concludes with book three, A Darkness at Sethanon. Return to main site. Library Browse Silverthorn The Rif Look Inside.

Feist Clear Rating. Feist, master of magic and adventure, now available in ebook For nearly a year peace reigned in the …read more. Save for Later.